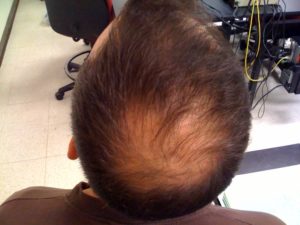 Leider ist dieser Eintrag nur in Englisch verfügbar For the sake of viewer convenience, the content is shown below in the alternative language. You may click the link to switch the active language.

Leider ist dieser Eintrag nur in Englisch verfügbar For the sake of viewer convenience, the content is shown below in the alternative language. You may click the link to switch the active language.

The Relation between Testosterone and Hair-Loss

The normal hair thinning, called hereditary hair loss, can affect both women and men, but women are usually affected fewer. It’s a rather common condition so that it nearly could be considered as a part of the natural aging process.

Hair loss and baldness appear in different patterns for women and men. On men, particular areas on both sides of the front head and the top of the back of the head begin to get totally bald. The hair loss then progresses with these regions extending, and at last most of the head can be total without hair. The regions in the neck and the front of each ear usually remain unaffected.

Women seldom get totally bald areas on their head. On the head, all the hair begins thinning. This procedure is lasting for many years. Often the hair gets so thin that the scalp is clearly visible through the hair.

THE CAUSES OF HAIR LOSS

The skin has there layers: The outer coating, called epidermis, is composed of epithelial cells. Under this lies the dermis consisting of connective tissue. The lowest layer is called the hypodermis and consists mostly of fat cells.

The skin has narrow pores, hair follicles, extending from the surface to the top of the sub-dermis, called hair follicles. A hair spread from a growth zone in the bottom of each hair follicle and out to the surface.
The common form of hair loss is caused by a substance in the body, called dihydroxy-testosterone (DHT), a metabolic product from the male sex hormone testosterone. It prevents the cells in the hair follicles from dividing so that the production of hair will slow or even stop. Even women have some amount of DHT in their blood. Therefore, they also can be affected by this kind of hair loss.

The good thing is that not all cells are susceptible to the influence from DHT. (However, in some individuals inherited the susceptibility from the parents.) Also, follicle cells in the lower parts of the head are usually resistant to the influence from DHT. (Therefore these areas are used for transplantation.) Beside the DHT, there are fortunately other substances in the tissue which are giving the cells signals to produce more hair. Minerals, vitamins, and essential fatty acids are helping in growths progress of the hair. A proper diet, therefore, is very efficient.

Did you know, that some substances may block DHT and even can easily remove it out of the tissue?

Having a proper diet including minerals, vitamins, as well as anti-oxidants may lessen the speed of hair loss.

There exist pharmacological products such like medicines used to treat prostate hypertrophy; as they block DHT, they have been tested and proven to stop hair loss and to get the hair to regain.

If you are suffering from hair loss, the goal should be to reduce the conversion of testosterone into DHT. It’s feasible with a proper diet including some effective natural food supplements. If you are under hormone treatment, you should be assured, that the product you are taking is made on a natural basis and not artificial. Otherwise, you may risk your health.

Eligible food supplements should contain vitamins or minerals that are necessary for hair growth. There even are substances that give signals to the hair follicles to increase hair growth, for example, procyanidin B2. The product of your choice should work as an antioxidant. L-arginine, for example, can inhibit oxidative attack on the follicle cells.

Palmetto extract, for instance, contains substances acting as DHT blockers by pretty the same mechanism as the prostate medicines mentioned above.
Green tea extract has shown itself to contain efficient substances to reduce the conversion of testosterone to DHT.

Surgery (Transplantation) is an effective treatment for baldness in limited areas. By surgery, hair follicles from parts of the skull which are immune to DHT are transplanted to bald regions. However, the hair in the treated areas will not get as thick as the naturally growing hair.

It is even possible to implant artificial hair into the scalp. By this method, large bald areas can be covered, but the treatment implies a particular danger for infection, requires good hair hygiene afterward and requires a regular refill to replace lost hairs.